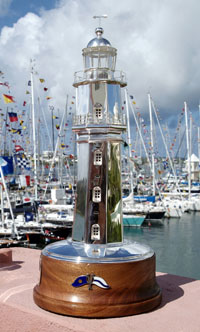 Dateline Newport RI: June 24, 2016— An international group of sailors and guests at the 2016 Newport Bermuda Race prize-giving will celebrate the final moments of a spectacular week after starting the 50th Thrash to the Onion Patch Friday, June 17 in Newport, RI. Of the 185 boats officially registered to race, 133 boats set out expecting be sorely tested by difficult conditions in the 635-mile Gulf stream crossing. Forecasters were wrong. 122 finished with just ten dropouts coming from equipment failures or just drifting conditions. The race actually turned out to be one of finest with a full moon and normal offshore sailing conditions.

His Excellency, The Governor of Bermuda, George Fergusson and the Commodores of the Cruising Club of America, Jim Binch, and of Commodore of Royal Bermuda Yacht Club, Leatrice Oatley, will present 114 prizes. Five are major Division trophies and the remainder are for class podium finishes and other awards. The ceremony is held on the grounds of Government House overlooking Bermuda’s North shore channel.

The yacht Warrior Won, an Xp41, skippered by Christopher Sheehan of Larchmont (NY) Yacht Club took the main prize, the St David’s Lighthouse Trophy. This silver replica of the islands landmark lighthouse is awarded to the boat in St. David’s Lighthouse Division that is first on handicap corrected time. This division was the largest in the fleet with 110 entries.

On the side of youth

When the Chilean-flagged Swan 57 Equinoccio powered through a Gulf Stream squall last weekend during the Newport to Bermuda Race, the speedometer pegged 15.7 knots, a record for the boat. As the sheets strained, a tiny voice rang up from the companionway, “Usted debe tomar la vela hacia abajo o irá en el agua!”

What little 3½-year-old Larry Westcott was saying to his father was this:  “Take the genoa down or it’ll get ripped off and blown into the water.”

Father Martine Westcott obliged. He dropped the genoa, took in a reef, and the boat galloped along under shortened sail until the squall passed. “That was a precise call he made,” said Martine, recalling the moment.

The teeny sailor has sailed more than 5,000 miles with his mother, father, Uncle Philip, and crew. Yesterday he was cheerfully greeted by Royal Bermuda Yacht Club Commodore Leatrice Oatley.

This year the race had its first-ever Chinese entry, Spirit of Noahs (sail number CHN 323). A J-44 chartered from the Massachusetts Maritime Academy, the boat was sailed by 10 experienced Chinese sailors from Noahs Sailing Club, described as the first professional team based in Shanghai. Last October, Team Noahs raced in the Audi China Coast Regatta in Hong Kong and then in the Audi Hong Kong to Vietnam Yacht Race. In December, the team competed in the Rolex Sydney Hobart Yacht Race in their very own TP 52.