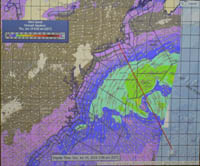 Dateline Newport RI: June 17, 2016 — Last minute preparations were underway early for the Newport Bermuda Race fleet getting ready for the first warning of the 50th Thrash to the Onion Patch at 2:50PM EDT this afternoon [June 17]. The start is later than previous races because the timing of the tide. There are 17 Classes this year. If all goes well, the first start, the 4-boat Spirit of Tradition Division, will start at 3:00PM. Subsequent starts are planned at 10 minute intervals as posted on the event website Starting Order.

Race organizers and competitors have been concerned about rough weather in and south of the Gulf Stream on the course to Bermuda. Race Chairman AJ Evans, Principal Race Officer John Osmond, CCA Commodore Jim Binch and RBYC Commodore Leatrice Oatley met Friday morning to review the latest forecasts. Evans confirmed that the race will start on time. Morning forecasts suggest that the winds predicted earlier in the week should moderate.

Earlier Thursday and on Friday morning a few boats had decided to withdraw based on long range predictions of high winds up to 45kts and up to 18 foot seas in the Gulf Stream. Winds should be from northeast to east stacking up the waves against the north and east-bound current. The predictions issued late in the morning of the start were more moderate… a beat into the sea breeze at the start, then very light winds becoming northeast to east 10-20 kts for the approach to the top of the stream. The stream will be rough with 20 to 30kts. In the ‘Happy Valley’ approach to Bermuda, the winds are predicted to shift to the south or southwest. There will be something for everyone in this 110th year of racing to Bermuda.

Initially 21 individual boats entered the overall series, 14 in the traditional series and seven in the second running of the ORR Navigator’s Series. The NYYC regatta proved to be a tough test on its second day with at least two traditional Onion Patch Series entries being damaged in a port-starboard collision.

In the gusty 30kt winds, Rives Potts ‘Carina’ collided with the US Navy’s Navy 44 ‘Defiance’ skippered by James Reynolds. ‘Defiance’ was dismasted and ‘Carina’ suffered a damaged bow. ‘Cecile Viking' and the other ‘Defiance’ in the Navigator’s Division did not start the final race on Sunday.

How to Enter the Onion Patch Series

2. Decide to enter the Series as an individual yacht or form your three-boat team. Teams may be formed later if you are uncertain.

This email address is being protected from spambots. You need JavaScript enabled to view it.
Mobile: +1-978-852-3304

Media Contact: This email address is being protected from spambots. You need JavaScript enabled to view it.