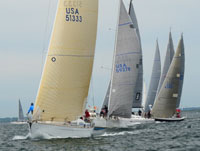 Initially 21 individual boats entered the overall series, 14 in the traditional series and seven in the second running of the ORR Navigator’s Series. The NYYC regatta proved to be a tough test on its second day with at least two traditional Onion Patch Series entries being damaged in a port-starboard collision.

In the gusty 30kt winds, Rives Potts ‘Carina’ collided with the US Navy’s Navy 44 ‘Defiance’ skippered by James Reynolds. ‘Defiance’ was dismasted and ‘Carina’ suffered a damaged bow. ‘Cecile Viking' and the other ‘Defiance’ in the Navigator’s Division did not start the final race on Sunday. 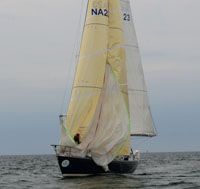 Since the competitors in the traditional Onion Patch windward-leeward racers sail different length courses over the two-day New York Yacht Club Regatta, the final ranking of the Onion Patch boats is based on a formula that divides the yacht's corrected time by the distance of the race she participated in. This formula results in a corrected seconds per mile number. The competitors are ranked in order of the fastest (lowest) sec/mile to the slowest (largest) sec/mile for each race. Points are awarded according to ranking for final regatta results, and these points are used in the compilation of the overall scores in the series.

Competition is offered once again in high-level, windward-leeward racing in the ‘traditional’ Onion Patch Series. Less intense competition is offered in Newport and Bermuda with racing around government marks and set buoys in the Onion Patch Navigators Series. Boats must qualify for each of the events in the series under the individual event’s rules.