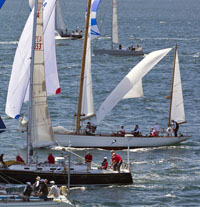 Newport RI, March 17, 2014: With two weeks to go before Applications for Entry close on April 1st for the 49th Newport Bermuda Race, 158 boats have filed Applications for Entry.  Many boats long identified with the race are coming back, and there is an enthusiastic response from first-time skippers, who make up 20 percent of the total.

The variety of entries is notable. Among the returnees are 2006 and 2008 St. David's Lighthouse Division winner Pete Rebovich with his family crew in Sinn Fein. Remarkably, the nearly 50-year-old Cal 40 was almost entirely destroyed in superstorm Sandy in 2012, but she's been rebuilt and will be on the starting line on June 20.  The famous Classic wooden 52' yawl Dorade, built in 1929 for designer Olin Stephens, returns under owner Matt Brooks. Last year Dorade won the Transpac Race in the Pacific Ocean.

Spirit of Bermuda, owned by the Bermuda Sloop Foundation and modeled on 19th century Bermudian commercial ships, will race again. In 2012, sailing with a crew of Bermuda youngsters, she was awarded a special seamanship award for her efforts to assist another racing boat that was in trouble.

Applications for Entry are due by 1700 hours, April 1, after which applicants may incur a time penalty.  The process begins in the race entry portal on the race web site. Also online are a complete guide to entry, race documents and requirements and an extensive FAQ, all found under the "Entry" section of BermudaRace.com.

As the entry window closes, Bermuda Race Organizers are proud of the tremendous diversity and great quality of this fleet.  Please join us for the 2014 Thrash to the Onion Patch.

Important dates on the 2014 Newport Bermuda Race calendar include the following:

Bermuda is the Official Host of the Newport Bermuda Race. For details on all the excitement and events Bermuda has to offer, call your travel agent or visit www.bermudatourism.com

Gosling's Rum is the Official Rum of the Newport Bermuda Race. Try a Dark ‘n Stormy®, the taste of Bermuda. For more information visit www.goslingsrum.com

Pantaenius American Yacht Insurance is the official lead sponsor of the 2014 Newport Bermuda Race’s tracker, which will be visible on the race’s web site: www.pantaenius.com/en/american-yacht-insurance.html

Newport Shipyard is the Official Shipyard of the Newport Bermuda Race. Come get ready for Bermuda, swap strategies, and walk the docks among veteran sailors. www.NewportShipyard.com

Vineyard Vines is the Official Newport Bermuda Tie Sponsor providing commemorative ties to the afterguard of the competing yachts. www.vineyardvines.com

Brewer Yacht Yard Group is the Official Boat Preparation Resource of the Newport Bermuda Race.  Experienced staff at Brewer yards from New York to Maine will help you and your crew plan and prepare for a successful race. www.byy.com

Hinckley Yachts is the Official Sponsor of the Captains Meeting for the 2014 Newport Bermuda Race, and will provide the check-in boat and other boats for official observers. www.hinckleyyachts.com

OCENS is the Newport Bermuda Race’s Official Race Communications Partner. Satellite communications and weather information for the race and the world.  www.ocens.com/nb