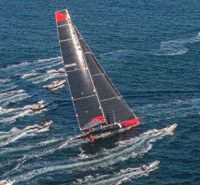 Dateline Newport RI: June 17, 2016— Racing in the 50th Thrash to the Onion Patch got underway right on schedule. It was a routine sequence with boats sailing close on the wind heading south to Bermuda. It was a flood tide, so only one boat was over early. Race historian John Rousmaniere said it was the most routine start he had ever seen.

Up until mid-week the race looked to be the second or third largest in history. Then the weather forecasts began predicting gales in and below the Gulf Stream. Following the weather briefing on Thursday night boats began withdrawing from the race. Finally 47 boats that had entered decided not to race. That brought the total from 184 on Monday to 142.

The 100-foot ‘Comanche’ took off in the last start, the Open Division, and drew a crowd of press boats at the beginning of her record-breaking attempt. The record of 39hr 39min 18sec was set by the 88-foot ‘Rambler’ in 2012.

In his morning briefing to the fleet, Chairman AJ Evans told the skippers that Commanders Weather advised and the committee suggests that if skippers decided to withdraw after starting they should decide before entering the Gulf Stream. He emphasized once again that the decision to race is the responsibility of the yacht’s person in charge.

Watch the start and follow your favorites to Bermuda

If you cannot be in Newport, the start will come to you. Watch on Livestream 2PM-5PM for live video and commentary on the start. Commentator Andy Green will be host the program from the Inn at Castle Hill overlooking the starting line. With cameras on the hill and on the water, he’ll get close to the action bringing live sailing directly to you. Audio also airs on Newport radio FM 105.9.

Green will also post race updates with commentary at 10AM EDT, and at 12, 2, and 5PM daily throughout the race. Facebook, twitter, and the web will be buzzing with news and reports

Virtual spectators canl watch the story unfold as their favorite yachts, skippers, or crewmembers in this 635-mile ocean classic tack and gybe their way through the Gulf Stream and hunt for the wind in the ‘happy valley’ north of Bermuda. All boats in the 2016 fleet will be tracked by YB satellite trackers as live as it can be on Pantaenius Race Tracking — www.pantaenius.com/NBRtracking — your link to all the action in the race.