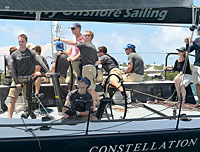 Race 1 was a windward-leeward course that was eventually abandoned following a protest against the Race Committee that raised the point that boats had sailed the proper course. The Race Committee abandoned Race 1 under RRS32.1(e) “for any other reason directly affecting the safety or fairness of the competition.”

Apparently there was confusion over the course being sailed. The course posted on the signal boat was Course 1, a windward-leeward, three-lap course. Constellation rounded the leeward mark for the second time and then saw the Principal Race Officer sighting the line and the secretary in place to record finishers. They thought they needed to finish and returned, crossed the line and got a horn, signaling a finish. Boats them followed across the finish line and got the signal.

There were two misses… miscommunication and misunderstanding. The committee abandoned Race 1 as unfair competition.

Race 2 featured ‘tour of the Island’ courses. Class 1 through 3 sailed a course to the windward mark, then deep into Port Royal Bay and back out to a right turn into the Grannaway Deep and returned back out into the Great Sound, and around a ship channel mark in the middle of the Sound. From there the course went straight back through Two Rocks Passage to the finish in Hamilton Harbour.

The new Navigators Division race for cruiser types was also a flexi course, but different. This group called Class 4 didn’t go into the Grannaway Deep. Instead they sailed to the far west corner of the Great Sound and on to the finish.

Only one race was scheduled for Class 4. It was won by Glenn Doncaster’s Sabre 426 Nanuq from Fishing Bay,Virginia.