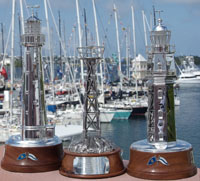 Newport, R.I., June 10, 2014: With the June 20th start of the Newport Bermuda Race fast approaching, 165 boats are entered for the 49th sprint to the finish off St. David’s Head, Bermuda. The start will be off Castle Hill, in the mouth of Narragansett Bay.

Organized by the Cruising Club of America and the Royal Bermuda Yacht Club, the 635-mile Newport Bermuda Race is sailed almost entirely out of sight of land and across the Gulf Stream. Explains race chairman Fred Deichmann, “We evaluate the crew and inspect the boats because, as the Notice of Race states, ‘The Newport Bermuda Race is not a race for novices.’” There are no novices here. Eighty-one of the skippers listed in the May 9 entry list competed in the very rough 2012 race, and 36 of the boats have already done five or more Bermuda Races. Yet there is also new blood, with 42 new entries. The average overall length of the boats on the list is 47 feet, one foot less than the average length in 2012.

Twenty-one states from Maine to California are represented in the fleet, with especially strong turnouts from New England (67 boats) and the Chesapeake Bay area (20). The 16 entries from outside the United States include one boat each from Austria, Germany, Russia, and Spain; three from Bermuda; four boats from the U.K.; and five boats from Canada.

More than 100 prizes will be awarded at the traditional ceremony at Bermuda’s Government House on June 28.Among the new awards this year are Regional Prizes presented to the top boats hailing from five regions of North America. Sailors may apply for these and other prizes at bermudarace.com/entry/special-entry-prizes/

The fleet is assigned by type and crew to five divisions. The largest is the St. David’s Lighthouse Division (100 boats), for multi-purpose cruising/racing boats. This is one of the race’s three divisions that have seen an increase in entries this year, with four more boats than in 2012.  Returning are the top five boats in the division standings from the last race, beginning with the 2010 and 2012 St. David’s Lighthouse Trophy winner, Rives Potts’ 48-foot Carina. No boat has done more Newport Bermuda Races (20), or won more of them (three). Also returning in the St. David’s Division are the second through fifth place boats in 2012, the U.S. Naval Academy’s 44-footers Defiance and Swift, plus Llwyd Ecclestone’s Kodiak and Stephen Kylander’s Dreamcatcher.

Another entry is a happy surprise. After Peter S. Rebovich Sr.’s 2006 and 2008 St. David’s Lighthouse Division winner Sinn Fein was nearly destroyed by Hurricane Sandy, there was concern that she would never sail again. But the boat has been rebuilt in a lengthy process that her owner calls “Sinn Fein Resurrection,” which is described in the boat’s blog on the race website at http://bermudarace.com/2014-race/racers-blogs/. This division is also the home of two famous, highly competitive classic wooden yawls designed by Olin Stephens and built in the 1930s. They are Matt Brooks’s 2013 Transpac winner Dorade and 2012 Bermuda Race Class 6 winner Black Watch, commanded by John Melvin.

The Gibbs Hill Lighthouse Division (eight boats), for all-out racing boats, is smaller than usual, but is sure to be watched carefully for the expected duel between two 72-foot “mini-maxis,” George Sakellaris’ Shockwave and Hap Fauth’s Bella Mente. When they raced side by side down the course in 2012, Shockwave won the Gibbs Hill Lighthouse Trophy and the North Rock Beacon Trophy as top boat under the IRC rating system. She recently won the Royal Ocean Racing Club’s Caribbean 600. With the 90-foot Rambler not competing this year, Shockwave and Bella Mente are expected to compete for first to finish honors.

The Cruiser Division (36 boats) is 20-percent larger than it was in 2012, when 30 boats that competed for the Carleton Mitchell Finisterre Trophy. Five of that race’s top eight boats are back: True, sailed by Howard Hodgson, Jr., Peter Noonan’s Defiance, John Madden’s Lady B, Chris Culver’s Cetacea, and Howard Eisenberg’s Isola. There is a new prize for the top-finishing Cruiser Division boat with just four crewmembers.

The Spirit of Tradition Division, for traditional boats, has one entry, the 118-foot Bermuda Sloop replica Spirit of Bermuda, an eight-year-old, three-masted sail-training vessel based on traditional 19th century Bermuda trading ships and crewed by sailors representative of Bermuda’s population. In the 2012 race, Sprit of Bermuda turned back to assist a competitor in trouble and was awarded a citation for exemplary seamanship by the Bermuda Race Organizing Committee.

No boats have entered the Open Division for racing boats with canting keels.

In other news, the Onion Patch Series for three-boat teams, celebrating its 50th anniversary this year, is introducing the Navigators Race Series alongside its traditional series. More information is available at www.onionpatchseries.com